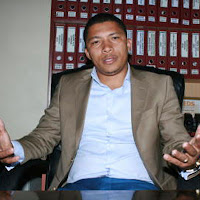 Sunday May 5, 2019-Political analyst Brian Weke has termed the recent revelation of attempted theft of public funds in Kiambu County just a tip of the iceberg among elected politicians.

This is after it emerged that the county had allocated monies for 'strange projects' among them the upkeep of former President's, which is the central Government's role.

Speaking on Radio Jambo's Mazungumzo Waziwazi Show on Saturday, Weke said that this could be the reason behind unending politicking by politicians allied to the Deputy President William Ruto.

"This could be the reason why they are bringing in politics huku wakificha ufisadi wanaofanya (as they secretly engage in corruption)," said Weke.

Weke stressed on the need for a serious probe into Waititu's case, adding that he should be answering to questions from investigators by now.

"Watu kama hawa tunafaa tuongee wakiwa ndani (such people should have been arrested already)," he added.