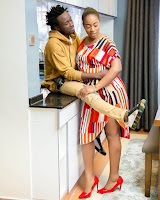 Saturday, May 11, 2019- Singer Bahati’s wife Diana Marua has opened up how her ex-boyfriend broke her heart in the most ruthless manner.

Speaking to a local magazine, Diana revealed that she broke up with Nick after she caught him pants down with a slay queen in his car.

Interestingly, this is the same day Bahati was shooting a video for his song ‘mapenzi’ in which Diana was a video vixen.

“Bahati and I started off as friends. We met in 2016 when he was looking for a video vixen for his hit song Mapenzi. I remember I was awe struck. I even took selfies for my Instagram followers. I was seeing someone when we met but on the day of the video shoot, I found him cheating inside his car. The tears you see in the video are real heartbreak tears,” she said.

She would start to hang out with Bahati after the video shoot and as they say the rest is history.

She went on reveal how Bahati brought her close to God and helped her quit drinking.

“I respected Bahati so much that sometimes when I was tipsy and I knew I was going to meet him, I would chew many PKs to mask the smell. He would know I was tipsy but I always tried to make light of it,” she added.

Bahati and Diana got married in a low key ceremony two years ago and are blessed with a n adorable daughter called Heaven.