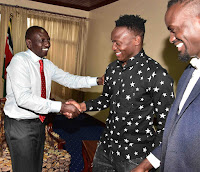 The players with Kenyan descent played a vital role to help their respective teams qualify for the lucrative Champions League final slated for June 1, in Madrid.

Origi, in particular, has won plaudits after scoring a brace and helping Liverpool overturn 3-0 deficit and knocked out fancied Barcelona 4-3 on at Anfield on Tuesday night.

The 23-year old is son to Kenyan international, Mike Okoth but play for Belgium where he was born.

On Wednesday night, Wanyama's Tottenham pulled another remarkable feat by coming from 3-0 down to win 4-3 against Ajax and booked their place in the final.

Wanyama becomes the second Kenyan player to feature in the final of the prestigious competition after his brother McDonald Mariga.

Mariga was part of the Inter Milan squad won the Champions League trophy in 2010 under the stewardship of Portuguese coach, Jose Mourinho.

See his tweets below.

With the teams facing improbable tasks of reaching the #UCLfinal, the lads, especially Origi, displayed fierce competitiveness, devastating finishing to complete an epic turnaround and crown victory. All the best in the Madrid showpiece. @SpursOfficial @LFC @ChampionsLeague .
— William Samoei Ruto, PhD (@WilliamsRuto) May 9, 2019