We will kill you like a dog for campaigning for WILLIAM RUTO in Central Kenya – Kikuyu MP, KIMANI ICHUNGWA receives death threats 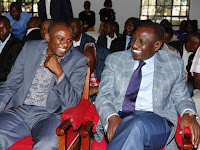 Friday April 19, 2019 - Kikuyu MP, Kimani Ichungwa, has claimed that he has received death threats from unknown people who warned him against campaigning for Deputy President William Ruto in Central Kenya.

In an interview with a local daily on Thursday, Ichungwa released a thirty second clip of a man sending a stern warning to Ichung’wa over his continuous support to the Deputy President William Ruto.

“I am telling you this…stop auctioning the Kikuyu community. You can die very easily. Let us see you again one day with Ruto you will face the consequences,” the man in the clip said.

The outspoken lawmaker further lamented that despite having reported the matter to the police, there is no one who has since been arrested in connection with the threats.

An official from the office of the Inspector General of Police mentioned that the authorities are aware of the matter and are currently investigating it.

“We confirm that action is being taken and we shall keep you posted on the progress,”said the officer identified as Mr Peter Thuku.

The MP’s death threats come barely a week since his security detail was withdrawn by the government.