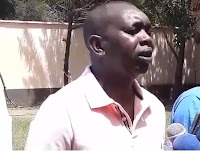 Monday, April 15, 2019 - Kapsaret MP, Oscar Sudi, has come out guns blazing and attacked COTU boss, Francis Atwoli, after he said that Deputy President William Ruto will not be on the ballot in 2022.

Sudi linked Atwoli to the brutal murder of the late MP, George Muchai, and claimed that he may be planning to kill Ruto just the way he killed Muchai and that’s why he is saying that Ruto will not be in the ballot in 2022.

He further insulted him badly, claiming that his big stomach is full of feaces.
Here’s a video of Sudi unleashing his wrath on Atwoli.