This is exactly why China refused to give UHURU and RAILA Sh368 billion for the extension of SGR from Naivasha to Kisumu-This is serious! 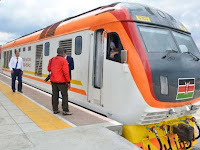 Saturday April 27, 2019-Barely a day after China refused to grant President Uhuru Kenyatta and Opposition Leader Raila Odinga the Sh368 billion they were seeking for the extension of Standard Gauge Railway from Naivasha to Kisumu, details have emerged about the difficult conditions that made it impossible for Kenya to secure the funding for the second phase of the SGR.

President Uhuru Kenyatta and his ODM counterpart Raila Odinga had traveled to China and appeared assured of clinching the Ksh368 billion financing to extend the line to Kisumu.

However, according to reports, China did not agree with the terms of the loan that Uhuru was proposing.

Reports indicate that Uhuru had asked for half of the money to be given as a grant and the balance be in a loan with more relaxed conditions.

China, on the other hand, insisted on collateral, something Nairobi had gone to Beijing to avoid.

They wanted “sufficient proof of viability” before they could authorize the deal to construct the standard gauge railway beyond Naivasha.