The rot at Tumu Tumu Girls in Karatina exposed, students being mistreated like stray dogs (PHOTOs)

I am writing on behalf of frustrated parents and guardians of students studying at Tumu Tumu Girls High School in Karatina. For the past week, 32 girls have been subjected to harassment, assault, bullying, insults and isolation by the administration led by the principal, Mrs Jedidah Mwangi and deputy principal Bibiana Gicheru. The reason being that they are alleged to be lesbians. When we asked the school for evidence, they refused to back up their allegations. The girls were prevented from sitting for their end of term exams, inspite of us having paid school fees.

Some of the girls have been beaten so badly, that they have visible sores on their backs and feet. They were made to walk around the school without shoes for a whole week as part of the punishment and some have since developed painful blisters. They were called criminals by the deputy principal and told that it’s a privilege for them to be given food. In addition, they were isolated from the rest of the girls, during class and exam time. They were forced to stand in the rain and, as a result, some of them got sick but had no one to call for help.

Currently, as I write this, the girls have been sent home and instructed to come back on 7th May (3 days after official re-opening), which means they will miss the opening exams as well. We’ve obtained medical reports for the trauma and physical injuries endured by the girls. When some parents demanded for answers, the school’s security officers threw them out of the compound.

This is so wrong because, even if the allegations are true, why did the administration of Tumu Tumu Girls have to torture these kids? Why would the administration decide to take such inhumane actions against young girls who are under their care? Why not call the parents and talk about this issue? If the principal and deputy principal have evidence, why do parents have to wait for a month to see it? Some girls are traumatized and can’t to go back to the school because of the shame, stigma, and treatment they have gone through. he girls were exposed to humiliation and ridicule by their peers, they were tagged with manila papers on their chest inscribed- "DON'T COME NEAR ME!"

We need justice for our kids and demand answers from the administration. It’s so unfortunate that the principal and her deputy are ruining these young kids’ lives based on mere allegations.  Can the Nyeri County Education Ministry officials please intervene on behalf of the kids? #SemaUkweli 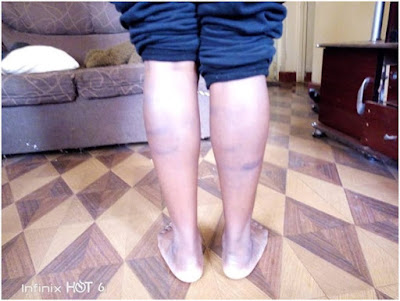