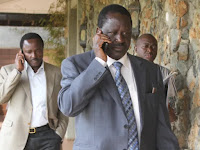 According to reports, the funds will be used to extend the Standard Gauge Railway (SGR) from Naivasha to Kisumu.

While addressing a rally at Sondu market on Saturday, Raila revealed that he would be part of Uhuru Kenyatta's entourage to China to seek the loan.

"I will be part of the delegation that will accompany the President to the Asian country next week.”

"The new SGR line will extend from Naivasha to Narok, Bomet, Sondu and finally Kisumu," he stated.

Raila hailed the SGR, saying it would boost the county's economy by providing employment opportunities to many Kenyans.

"We are going to establish a special economic zone in Kisumu and make the city the hub of East Africa," he added.

Initially, Raila had demonized SGR, saying it was the worst project ever done by Uhuru and his Deputy, William Ruto.