SHOCK as Ex-Kiambu Governor WILLIAM KABOGO now mocks UHURU on the fight against corruption-This guy is ruthless; see what he said? 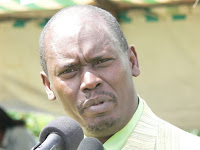 Monday April 8, 2019-Former Kiambu Governor, William Kabogo, has blasted the President Uhuru Kenyatta and the Jubilee Government in the fight against corruption.

Speaking during the Monday morning show on Citizen TV, the former Governor was relentless as he launched scathing attacks on Uhuru's Government inability to fight graft, citing the unexplainable delays when it came to graft investigations.

"Jubilee is a busybody; they want to take the country all over. They are washing their dirty linen in public and they have nothing else to offer Kenyans" Kabogo said.

"We cannot be in a theatre of games; people want to treat us to a show that there is a fight against corruption, there is no fight!" he asserted.

"How much time do you require to check where money has been taken? Money leaves Government account to an individual’s account, from there to his wife or his bodyguard or to this guy who flies to Kayole, the NHIF guy," he asserted.

He was referring to Fredrick Sagwe Onyancha, the face of the NHIF scandal, with his vast estate among items targeted by the Asset Recovery Agency, which confiscates properties accumulated through proceeds of crime.