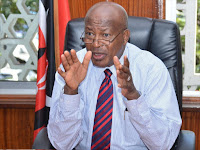 Thursday April 18, 2019-Attorney General Paul Kihara Kariuki on Tuesday sought to educate politicians allied to DP William Ruto on the role of the Directorate of Criminal Investigations (DCI) in the war against corruption.

Addressing National Assembly's Justice and Legal Affairs Committee, Kihara blasted Ruto and his allies, saying they have no understanding of the law that is why they keep criticizing DCI boss George Kinoti of going beyond his jurisdiction by taking on economic crimes.

According to Kihara, it's a provision of National Police Service Act, section 35, that DCI undertakes investigations on serious crimes, including money laundering. It also detects and prevents crime.

"There is, therefore, a misunderstanding because of inadequate knowledge on the law,” he stated.

The AG was responding to whether the Ethics and Anti-Corruption Commission (EACC) had delegated some of its roles to the DCI.

The DP allies have previously questioned the jurisdiction of the DCI in investigating corruption matters.