See how UHURU has reduced RAILA ODINGA to a mere bodyguard? Baba has lost his voice of reason and dignity ever since he joined Jubilee 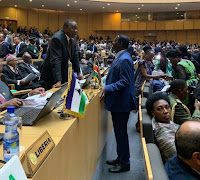 Speaking through social media yesterday, Miguna said that a man of Raila’s stature deserves better treatment during trips such as the one he took with President Kenyatta to China.

According to the controversial lawyer, Raila is getting a raw deal ever since he joined Uhuru in Jubilee.

He insisted that it is unfortunate to realize that Uhuru has made Raila work with his allies when he claims they are equal partners in Government.

He further said that Raila has failed the people who had a lot of hope in him when he wanted to rise to power before he made an about turn on the same.

“This is rich and amusing. I've laughed until my stomach hurts. So, Raila Odinga has become Uhuru Kenyatta's PA-cum-bodyguard like Jomo Gecaga? Imagine Raila Odinga being reduced to the same level as Jomo Gecaga! Gracious Lord! Wow! Sitting right at the back like a JAWANYA!’ he tweeted on Friday.