ISAAC RUTO will kill DP RUTO one day! See what he told him in broad daylight that has left entire Rift Valley talking 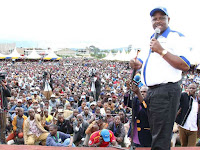 Speaking when he registered for Huduma Namba at Chebaraa Primary School in Chepalungu on Monday, Ruto warns that premature succession politics is likely to stall development in the country.

He urged leaders, especially those allied to Deputy President William Ruto, to focus on service delivery to Kenyans instead of engaging in endless 2022 debates.

He said the country is enjoying peace courtesy of the handshake between President Uhuru Kenyatta and opposition leader Raila Odinga and asked every leader across the divide to support the unity agenda for the development of the country.

"It is unfortunate that majority of elected leaders have been sucked into early succession politics and abandoned their work as leaders," he said.