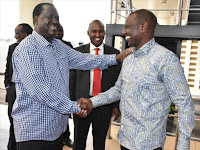 Kinoti is a highly respected personality in Meru and indeed Mount Kenya region and any attack on him is interpreted as an affront on the appointing authority - President Uhuru Kenyatta.

“Nobody is being targeted but if you are named in any corruption deal, it does not matter where you come from.”

“You must be investigated and prosecuted,” Munya said.

Speaking separately, Mike Makarina, chairman of People Living with Disability in Mt Kenya East told off Ruto for claiming that Kinoti was targeting him in the war on graft.

Two weeks ago, Ruto claimed that the DCI had been sucked into a political scheme and strategy to undermine the implementation of major development projects and in the end scuttle Uhuru’s legacy by making it impossible to deliver pre-election pledges.