Did ESTHER ARUNGA and TIMBERLAKE sacrifice their son? Witness reveals the strange marks on their late’s son forehead 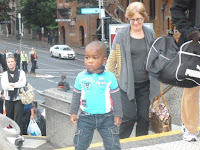 Thursday, April 11, 2019 - One of the witnesses in the ongoing case where former KTN anchor, Esther Arunga, is accused of conspiring with her husband, Quincy Timberlake, to kill their son, Sinclair, revealed that before the young boy died, he had marks associated with occult practices.

The witness identified as Chirstina Caroll, a close friend of the disgraced former TV queen and a medic by profession, said that during one of her visits to Esther Arunga’s house, she noticed her late son Sinclair had straight line cuts on his forehead.

When she asked Esther what had happened to the young boy, she told her that he fell down the stairs but the cuts looked like they had been inflicted with a razor or a knife.

“To me it looked like he’d been cut with a razor or a knife,” she told the court.

Christina had earlier told the court that before Sinclair died under mysterious circumstances, Esther was behaving like a person who had been possessed with demons.

She kept on complaining that she was seeing zombies invading the world and eating people.
Esther Arunga and her husband are accused of conspiring to kill their son.

They later lied that he fell down stairs.

Esther Arunga’s life was shattered after Quincy Timberlake introduced her to Finger of God Church, which is alleged to be a cult.