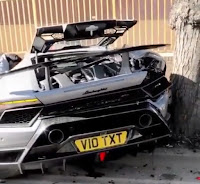 Tuesday, March 26, 2019 - This guy tried to show off his brand new Lamborghini Huracan worth Sh28 million in public but it didn’t go according to plan.

The pricey, high performance sports car was written off after the driver tried to pull a stunt on the road.

Footage shows the driver revving the car's 5.2-litre V10 engine, before setting off down the road.

But seconds into the ride, the driver seems to lose control and slammed into the wall before coming to a stop against a tree.

A spectator who shared the footage on Instagram wrote:

“He was revving and decided to do a launch control, at which point he lost control because of his cold tyres.”

“He hit the tree, went up the kerb wall-I’m pretty sure he was crying when he got out.”

“It was easily a write-off”