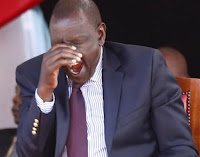 12 MPs, under the Kieleweke Movement led by nominated MP, Maina Kamanda, accused Ruto of fighting the President through proxies and further claimed that he was the one sowing discord in the ruling party by undermining the Head of State’s agenda.

Kamanda said Ruto was holding a dagger at Uhuru and he must be punished.

“Wewe hakuna kitu ingine, umechukulia Uhuru kisu. Wewe umechukua watu wake wale amefuta umeweka kwa ofisi yako. Hio ni kisu (You are holding a knife to the President. The people he has fired are the ones you have employed” Kamanda said.

Cherangany MP, Joshua Kuttuny, advised Uhuru not to “close his eyes” when he sleeps adding that Ruto should not “force” leadership by sending “attack dogs” to undermine and insult Uhuru.

“If you want leadership in Kenya tame your tongue, don’t use force,” Kuttuny said.

“I want to tell Jubilee people that if someone wants the Presidency and dresses down Kenyatta today who’s the President what will he do when he becomes President?” Kutunny added

Kuttuny, who is a former adviser to the President, said Kenya is bigger than Ruto and he should start respecting the President.

“Uhuru is not a fool if you see him saying the nation is bigger than an individual.”

“How will you succeed?”

“In the morning you insult Uhuru in the evening Raila,” Kuttuny said.