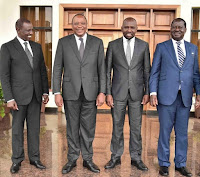 Speaking in Siaya County on Saturday, Raila claimed that Pope Francis urged Anyolo to reject the gift since it was bought using dirty money.

However, Raila Odinga’s comments were not received well by Murkomen who is a close ally of Deputy President.

Murkomen also accused Raila Odinga of politicising the war against graft as the succession debate heat up.

He said Raila Odinga wants to portray Ruto as the most corrupt person in Kenya thereby dimming his chances of succeeding President Uhuru Kenyatta in 2022.