Reversed Roles! This bold LADY proposed to her boyfriend in a popular Mall and he said Yes (WATCH) 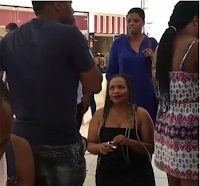 Sunday, March 10, 2019-This bold Woman decided to go against the grain went down on one knee and asked for her boyfriend of two months hand in marriage.

From the video shared on social media, the South African lady by the name Sikilelo Maki took matters into her own hands and popped the rather dreaded question, ‘Will You Marry Me?’
The two who were queuing for food at the Mall caused a scene as people gathered to witness the not so ordinary proposal.

Initially, the boyfriend thought she was joking because of the pranks they pull on each but when he realized she meant it, he was overcome by joy and started jumping up and down while hugging his fiancé and flaunting his ring.

Watch the Video below.