RAILA ODINGA JUNIOR opens up on his battle with BRAIN TUMOR just like his sister; ROSEMARY-No wonder his face and mouth are affected 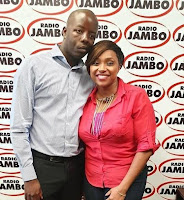 Speaking during an interview with Radio Jambo's Massawe Japanni, Raila Junior revealed that just like his sister, Rosemary, who almost went blind as a result of brain tumor, he too has had a fare of problems with brain tumor.

"Nothing happened to me although I suffer from a medical condition," he stated.

He noted that the tumor affected his nervous system since he was a child and that life has never been the same again.

"It’s a non-cancerous tumor that was in my brain and this affected my nerve system since I was young way back in 1985. It has always been with me in my lifetime,” Raila Junior narrated.