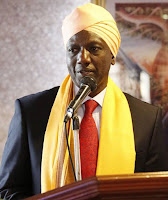 Speaking on Radio Maisha's Bunge La Maisha on Monday morning, Nyatike MP, Tom Odege, said that the nation would be turned into a haven of corruption if Ruto succeeds President Uhuru Kenyatta.

The MP said going by Ruto’s utterances, he is likely to stand by the side and let the corrupt take over Government if made President.

“(If he doesn't want us to fight graft in Kenya, it is pointless to have him as the president. If he is supporting the corrupt as the Deputy President, how will the country be when he becomes the president?)," the legislator posed.

He added that the DP may have a hard time making it to State House in 2022 because of his attacks on other leaders and reckless talk.