LADY narrates how gospel singers DK KWENYE BEAT AND HOPEKID had SEX with her and infected her with a deadly STD.

The 20 year old college lady who is a video vixen, claims that she met Hopekid online and he invited her to Nairobi for a sex date since she lives in Nakuru.

The lady claims DK Kwenye Beat  showed up naked stroking his dick as she was busy exchanging fluids with Hopekid.

The fat singer jumped on top of the lady after Hopekid was done and didn’t even  put on a condom.

The young claims the gospel singer infected her with Herpes, a deadly STD after the unprotected sex.

She exposed the two singers through popular blogger and social media influencer, Xtian Ndela, who has started a platform on  telegram called, Toboa, where people make confessions. 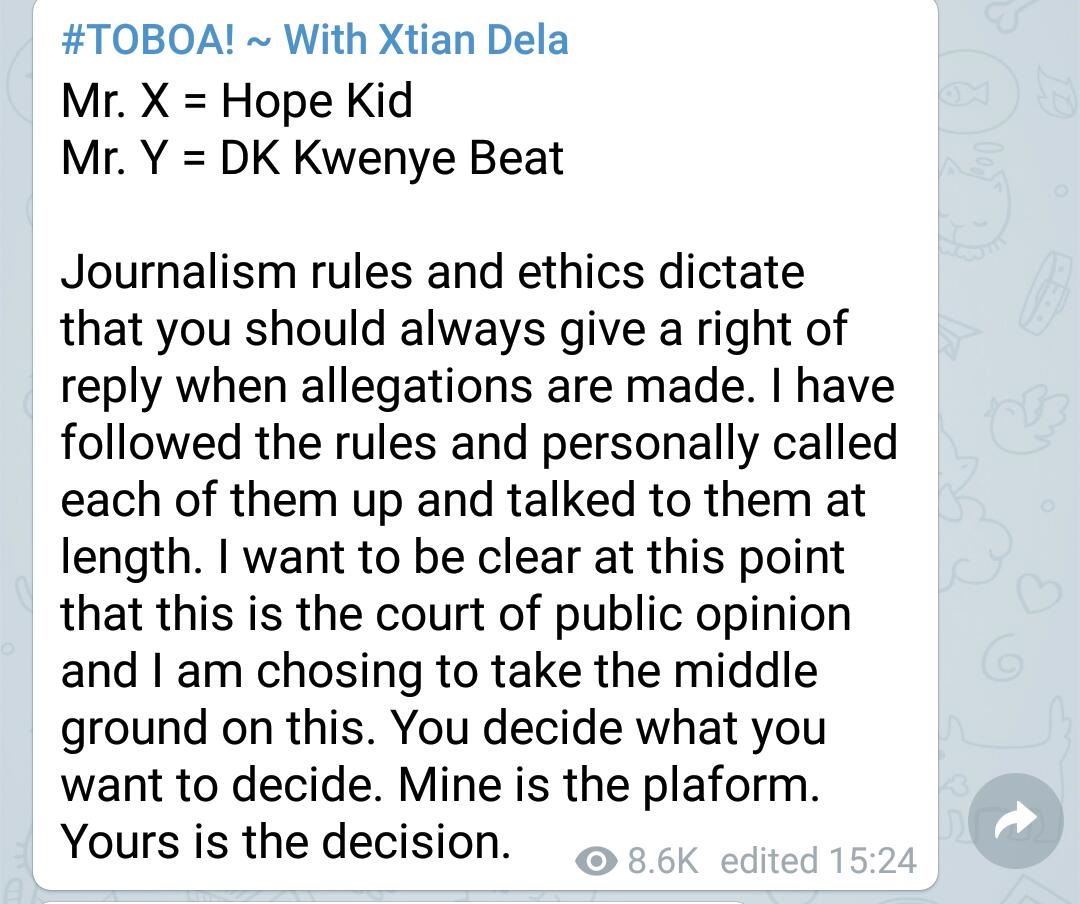 Here’s the lady’s shocking narration. The identity of Mr X is Hopekid while Mr Y is Dk Kwenye Beat.


“So last year, i was direct messaging kenyan artists about my career, video modeling. Getting a few replies from some of them. So one gospel artist called X gave me his number and told me to text him on WhatsApp. I thought i was gone get considered. We used to talk, like officially then one thing led to another after a few days we were sexting. Our horny selves decided to meet for a Holy Smash. I spared a day from school. Travelled all the way from Nax Vegas to Nairobi to get smashed. He was to pick me in town but he texted that morning telling me to go to some estate i won’t mention
When i got there he picked me up in a black Volkswagen Golf. It was tinted so when i got to the car the back left door was opened and i got in. That move ruined my life wallah. I will never recommend any gal to consider dating or smashing with these gospel artists… So Mr X was sitted on the co driver seat and his fellow gospel artist, Mr Y was sitter on the driver’s seat. Change of plans people. We went to Mr Y’s home instead
Got there i asked to go to the washroom, i peed then cleaned up my punani coz i knew what was coming next. Getting back to the living room, i was served wine and a Tee to change in. Size yake size ya noma. With my self respect i went to one of the bedrooms (out of 2) to remove my dress and put on the Tees still with my lingerie on. Went back to the living room and sat next to My X. He started kissing him and the next minute i was on his lap. He removed the Tees, tshirt, then unhook my bra so quickly. Wueh the way he was doing it, its like he has some good experience.
I told him i was uncomfortable banging in the living room with Mr Y around. He was so OK banging there but he insisted. So he took me to the second bedroom. I closed the door and switched off the lights.
When he was on top smashing the missionary way, i noticed there was light coming in from the corridor, door was opened. Boom! Mr Y was behind X. He had no clothes on and he was stroking his dick. Mr X was really hitting the spot and i started to moan like some possessed person so Mr Y climbed on to the bed, nilishtuka mayoo, he kissed me to prevent me from making sounds. Majirani wasiskie.
Mr cummed i guess, he got off before i realized whats happening, Mr Y was eating my pussy. Remember they both are gospel artists whom I’ve danced their songs i church since elementary sch.
Then boom Mr Y had his Dick in. He was heavy so i got tired and now i was able to breath and react. I shouted at him like super angry to get off of me. I was afraid they would do me harm of i didnt corp with them. So he left and i was alone with Mr X. I cried so bad and he was apologizing but i didnt take his sorry. I never had a threesome before and i felt like they were taking an advantage of me. Being like a whore to them. So i took a blunt from my bag got high then Mr Y, a pastor joined for a puff. Wueh these niggas tho heri Willy Paul gatho.
They called over an Uber to drop me off in town. Got back home After a few weeks, about 2 months, Mr Y, 3 party, unwanted person called saying how he missed me. Since i was over the shits, i considered being friends, stupid me. He started hitting on me saying we could be a thing yet he was engaged his fiancee works ‘abroad’ he claimed they had issues and he needed sth to hold on to. So boom am inNairobi again. We talked then we started making out. He got in but this time with no CD.

When i realized i told him to wear one. So we banged then showered and came back home. A week after the sex i got blisters around my pussy hole, mainly on my butt cheeks. Wueh went to Maristopes and i was told i had HPV, cervical cancer causing virus. This dude stopped texting back or picking up my phone.
Had to ask my sister in law foe cash to go to hospital, tests and meds, about 5K.
Nilimeza dawa but knowing am at a high risk of getting cervical cancer at the age of 20 years, not married, no kids yet i saw no point of living.
I texted him and told him that i feel like dying and he told me do the fuck you want. I suffer from mental illness JSYK, mental breakdown, depression, trauma, doubts etc.
So i took a new blade and cut my self on the arm severely. Am a weirdo, i prefer physical pain to emotional pain.
This is what i did to myself. Hoping to bleed to death (Picture Below). 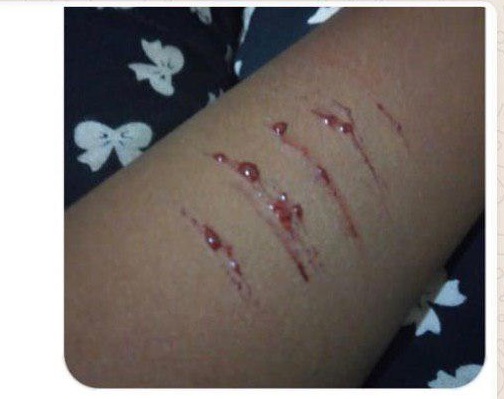 2 weeks after i finished the medications i got the blisters back, this shits painful BTW, i couldn’t sit, bathing was a task, peeing was another and long call was hell on earth

My sister in law and my mom took me to a popular gynecologist in town, and had several tests done on me. So expensive. About 20 k. Results came back HIV- but i was infected with Herpes fully, 4 types. He was the only one who fucked me with no CD.
Mayo. When i got my results from Karen hospital, located in the tallest plaza in town. I went to the last floor wanted to jump and kill myself since i saw no point of leaving but i thought about my Mum. Id hurt her so much. Like a slap on her face The celeb, Mr Y has been on my DM but i snob..so this year i texted him on WhatsApp telling him everything. He never freaked out and so i confirmed, he knew what he did to me so now i dont see myself dating because i wont be able to find a perfect match.
Someone to take the risk for me, am sort of a public figure am afraid of my status getting exposed or blackmailed in the future by my “partner” and insomnia be able to have a normal child delivery. Am fighting everyday to accept myself, taking medications daily which are so expensive, asking my big bro for medications but cant tell him which ones. Life is sad. Right now even simple things easily piss me off. I recently got angry and cut myself again its an addiction am unable to stop and i seriously need help since am afraid that one day i will not be able to leave my bedroom alive. No one in my family knows that i cut myself. They just think am a weirdo but i have so much on plate for a 20 year old who just started to understand what life is
Still trying to know who i am but damn. I have no reasons for living.
Here is a proof of conversation between the lady and Dk Kwenye Beat who wanted her to come to Nairobi for another sex date after that threesome sex . 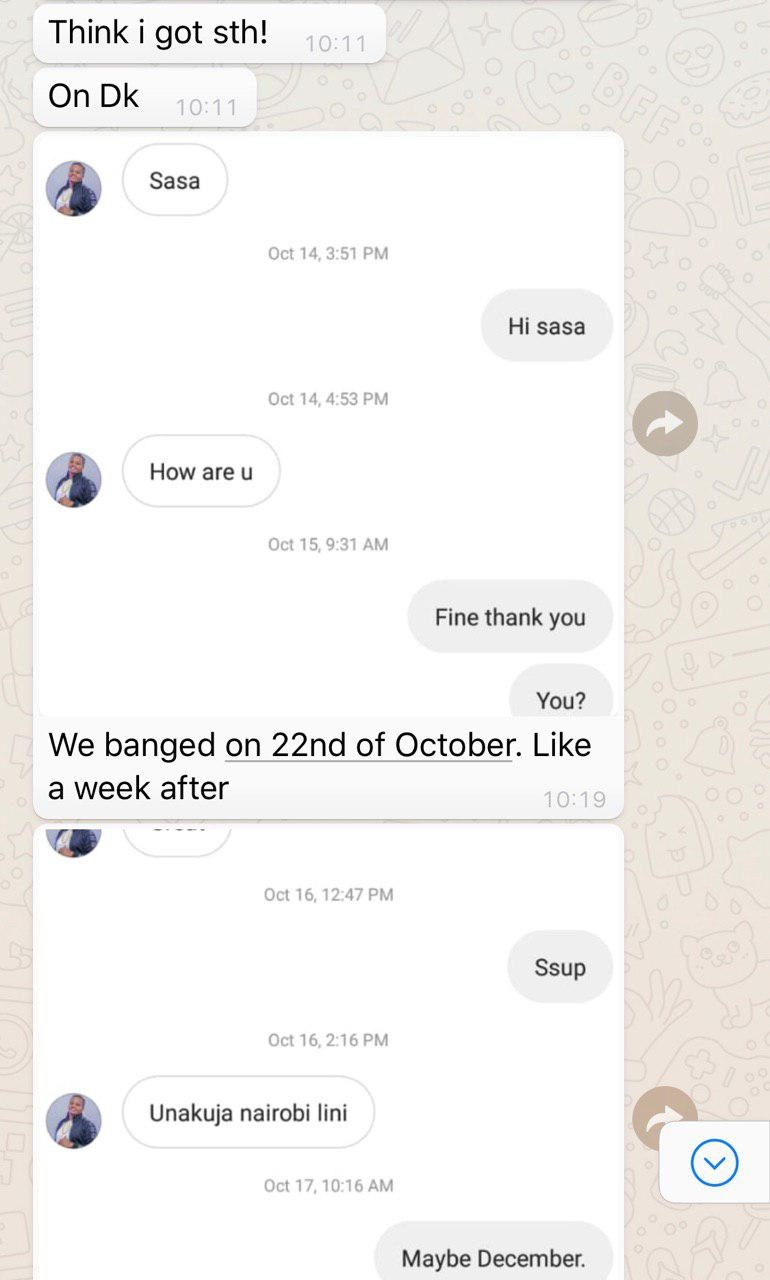 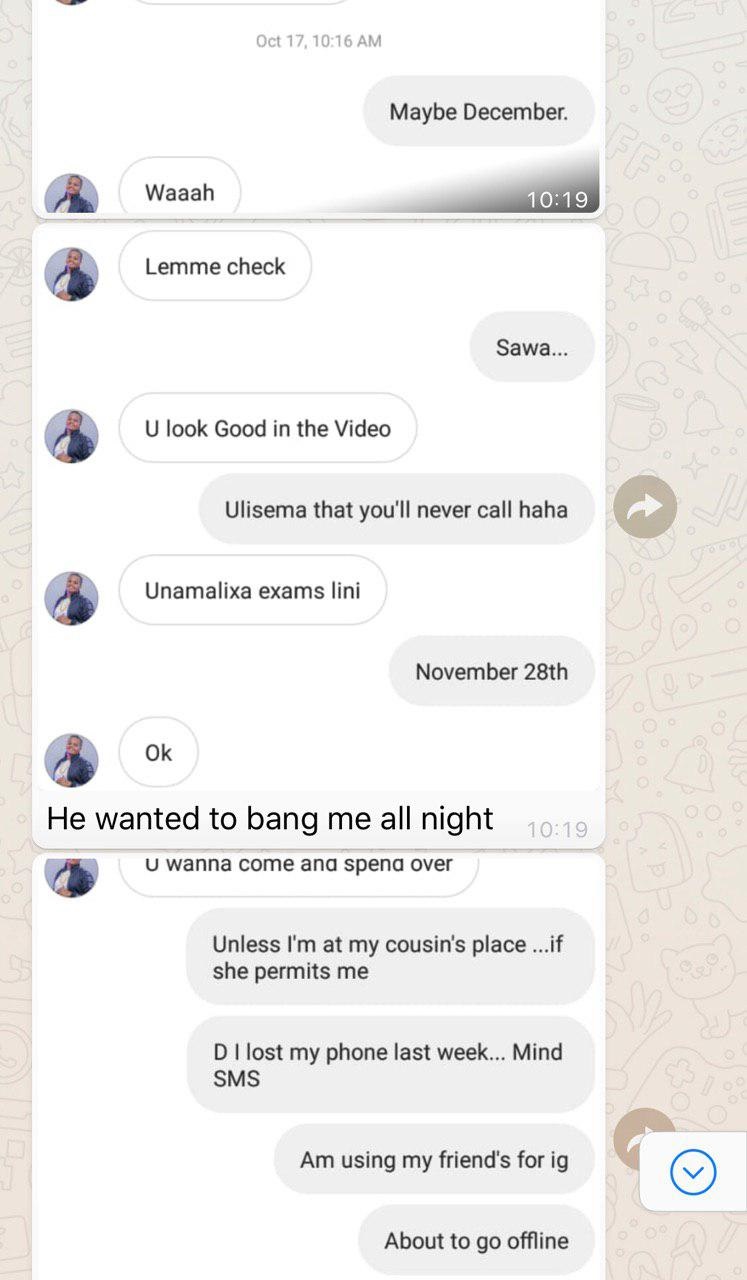