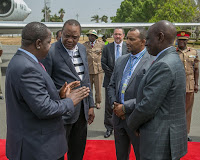 Monday February 10, 2019 - Interior Coordination Cabinet Secretary, Fred Matiangi, has revealed that President Uhuru Kenyatta called him before he appointed him as the Chairman of the National Development Implementation and Communication Committee.

Speaking in Kitutu Masaba constituency, Kisii County, on Friday, Matiangi said Uhuru told him to 'work and work' for the people.

He also asked him to ignore his critics who may be out to derail his agenda.

Matiangi said President Uhuru Kenyatta is only interested to see things moving on the ground, adding that his team will not spare detractors.

“That is what I will exactly do.”

“I am only interested to work with leaders who are focused,” Matiangi said

"I am not a politician and I know most of them like peddling rumours.”

“However, those who are ready to serve the people will benefit all the time.”

“The only business the President told me is to work for the people,” Matiangi added.