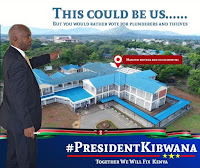 Friday December 7, 2018 - Makueni Governor Kivutha Kibwana has surprised Kenyans after he revealed that he only used a paltry Sh135 million to build an ultra-modern hospital that everyone seems to be talking about.

And that was not all, Kibwana also indicated that he used the remaining money to fully equip the hospital with ultra-modern equipment.

“For a cost of Sh 135 million, both construction and equipping, the Mother and Child hospital will be able to accommodate 120 adults and 80 neonates at a time,” Prof. Kibwana said.

Although this is not the first major project that Governor Kibwana has accomplished with such precision and with zero corruption, what has caused chatter on social media is the little amount of money used for the execution and completion of the project.

This comes even as other Governors continue to waste billions on such projects which cost as little as Sh135 million.

They should learn a thing or two from Kibwana.