MUDAVADI drinks like a fool, he drinks all night till 5 am and to imagine that he wants to inherit UHURU is a joke - RUTO reveals 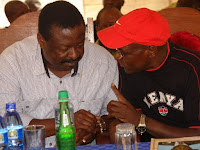 In several instances, Mudavadi has been calling for an audit on politicians who are donating millions of shillings to churches.

“We have people in the country who are donating more funds than Safaricom is giving through its foundation.”

“If he doesn’t have a big company like Safaricom, it is clear that the source of his money is questionable,” Mudavadi said in reference to Ruto.

However, in a quick response on Friday, Ruto told Mudavadi to go to hell and called him a drunkard who drinks all the night like a fool.

"You go out drinking until 5 AM and when you wake up, you come and question me where I get my money from," Ruto said when he attended Shabana FC fundraising in Nairobi on Friday.

He explained that the person's lifestyle was based on a gross misinterpretation of the Bible.

"Hawawezi kututisha hawa. Na mjaribu kufanya bidii ndiyo msikuwe mnaongea mambo ya bure (which loosely translates to: They can't threaten us. They should work harder so that they can speak on issues that make sense)" he said.