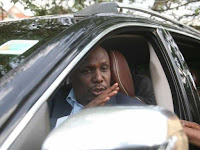 Monday December 3, 2018 - A section of leaders across the country have shared their sentiments about the ban of matatus from the Nairobi Central Business District starting this Monday morning.

Similar sentiments have been expressed by KANU chairman, Gideon Moi, who asked the Nairobi County Government to act quickly to alleviate the suffering of commuters.

He maintained that poor execution of the directive was counterproductive.

“Today we have witnessed commuters suffering after they were forced to trek for long distances to their places of work, small-scale traders incurring more costs ferrying their wares to the market, disruption of businesses and the old being stranded at drop off points with no alternative transport or anyone to assist them,” Moi said in a statement on Monday evening.

He asked the County Government to introduce efficient and affordable shuttles to pick passengers from the designated bus termini and drop them in the CBD.

“While we all look forward to a decongested city that reduces hours spent on the traffic jam, the Nairobi City County Government in collaboration with the National Government need to put in place proper plans for efficient and reliable transport system from matatu drop off points to the CBD,” Moi said.