Citizen TV host and Pastor, ROBERT BURALE, exposed badly by his ex-wife as a con and womanizer (LOOK) 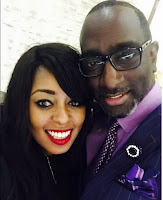 Monday, December 03, 2018 - Popular city pastor and fashionista, Robert Burale, is a proud owner of the fastest divorce record in Kenya.

Burale, who came to the limelight a few years ago thanks to the Fashion Show on Citizen TV where he was a panelist, was divorced after only one year and two days of marriage.

His ex-wife, Rozinah Mwakideu, who is a sister to radio personality Alex Mwakideu, has spilled beans on their short-lived marriage.

During a radio interview, Rozinah revealed that Burale was a wolf in sheep’s skin who frustrated him to the point of contemplating suicide.

“I would receive calls now and then from people and police saying Robert had unsettled debts.”

“It was a character he had and I kept waiting because I thought he would change because he was born-again.”
“For example, the main reason why I left was after my friend came to visit me and after she left she wanted to sue him.”

“I couldn’t handle that pressure plus other personal issues.”

“There were red flags that he was cheating on me but he would apologise.”

“However he would fail and repeat it. Robert had so many things he was hiding from me in the name of being a pastor…”

“I was expecting him to change. I became suicidal in that one year I lived with Robert because there was so much I was going through but I feared what people would say if I left.”

“My mother is a prayerful person and that helped me.”

Burale opened up on his failed marriage early this year where he claimed that the main reason why it didn’t work out is because he rushed to marry his wife without dating for a long time.

“We courted for five months and then got married in the same year. Everybody said we were rushing it but we were in love, in hindsight, we should have listened. We dated, courted, paid dowry and got married all within five months. Her parents were okay.” He said.