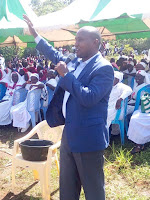 Junet took to his Twitter to reveal the assassination threats he has received from Migori Governor Okoth Obado as his team of assassins that murdered his pregnant lover, Sharon, tagged the DCI and ODM leader Raila Odinga.

"Sharon killers are planning to assassinate me and I got your threats ... A Muslim does not fear death," Junet tweeted yesterday.

He asked the IG to triple his security just in case.

Junet’s sentiments evoked mixed reactions on social media with a section of users advising the MP not to take the said threats lightly as he could wind up dead for real.

However, others questioned whether there existed any kind of relationship between Sharon and the MP that may prompt her killers to have him on their kill list.