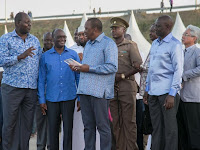 Tuesday November 27, 2018 - Transport Cabinet Secretary, James Macharia, seems to be among the most corrupt CSs in President Uhuru Kenyatta’s administration.

Macharia, who was appointed to the Ministry in 2018, has been the epitome of corruption in the Ministry that has a huge budgetary allocation.

On Tuesday, Kenya National Highway Authority (KENHA) released a report that showed that the Authority which falls under Macharia’s Ministry uses Sh 1.5 million to maintain the Thika Super Highway.

This is part of the new performance-based road maintenance project.

Notably, the amount used to maintain the 45-kilometre road is higher compared to other roads covering 1, 239 kilometres.

Cumulatively, KNHA used Sh1.08 billion to maintain Thika Road in a span of 2 years.
The maintenance work was conducted by Interways Work Ltd based in Nairobi.

Defending the high cost of maintenance, KENHA’s Communication Office pointed out that the maintenance has been instrumental in keeping roads in good shape.

“Please note that the contract amounts are based on road condition, amount of projected maintenance works, replacement of road furniture that may be damaged in case of accidents, lighting, drainage and blockage clearance among other extraneous factors,” said Mr Njogu, who is part of the communication team inside KENHA.