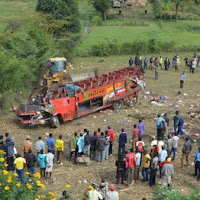 Wednesday October 10, 2018-At least 50 passengers were this morning killed in a fatal road accident involving a PSV bus.

According to Fort Tennan Police Station OCS Charles Ocharo, the freak accident occurred at Turnan Flyover on the Kisumu-Muhoroni highway.

He noted that the passenger bus belonging to Western Express SACCO was heading to Kisumu from Nairobi when it veered off a fly over, rolling several times in the valley.
Among the dead are 31 men, 12 women and 7 kids.
The cause of the accident is yet to be established though skid marks seen on the roads indicate the driver was trying to regain control.
The bus was said to be over speeding and was also overloaded.
An information Center has already been created at Kericho County Hospital in partnership with Red Cross Society.
More updates to follow…
The Kenyan DAILY POST