This is why you may never hear about JACQUE MARIBE and JOWIE again! Is Judge WAKIAGA compromised to give such a ruling? 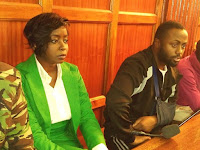 Wednesday October 17, 2018-The murder case involving Citizen TV Journalist, Jacque Maribe, and her killer fiancé, Joe ‘Jowie’ Irungu, has taken an interesting twist.
This is after Judge James Wakiaga warned the media against disgracing the accused until they are proven guilty of killing Monica Kimani in cold blood.
Jacque Maribe and Joseph Irungu had complained about how the media was covering the matter, saying it was disheartening.
Speaking on Wednesday, Justice Wakiaga asked the prosecution to check on their team and weed out those leaking information to the press.
He argued that he found out about some of the details of the case through the press and such a trend was not welcomed in his courtroom.
Justice Wakiaga warned members of the fourth estate that they would be held culpable if they write stories which were not yet brought before him.

He also cautioned members of the prosecution who would be caught leaking information to the media to watch out noting any person caught would face his wrath.