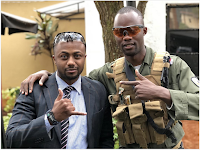 Friday October 19, 2018-Detectives from Directorate of Criminal Investigations (DCI) have arrested a third suspect in the gruesome murder of Monica Kimani.
Ms Kimani, who was a budding business lady, was killed on the night of September 20th at her apartment in Kilimani, Nairobi.
Citizen TV news anchor, Jacque Maribe, and her lover, Joseph Irungu, alias Jowie, are already in custody over the murder and police were looking for the third suspect.
Fortunately, police on Friday arrested Jenning Odhiambo from his hide out in Tanzania.
Special Crimes officers brought Odhiambo to DCI headquarters in Nairobi for questioning.
Shockingly, Jennings works at United States embassy in Nairobi as a security officer.
Odhiambo is a General Service Unit officer attached to Reece Company based in Ruiru.
His house in Ruiru was searched after he was arrested.
The Kenyan DAILY POST