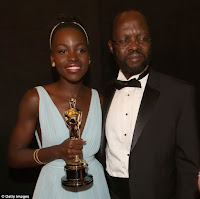 Friday October 19, 2018-Kisumu Governor, Prof Anyang Nyong’o, has accused a young lady of sending him nude photos and pornographic clips at night.
Addressing journalists on Thursday in his Nairobi office, Nyong’o claimed that an unknown woman has been sending him explicit photos and raunchy messages, especially at night, via WhatsApp.
“I never gave her my number.”
“I even don’t know who she is, yet she kept tormenting me at night with love messages,” Nyong’o, who is a cancer, survivor said.
He said he reported the number to police but they have been doing nothing to arrest the horny slay queen.
“I blocked her number, but after a few months, she resurfaced with her rude and nude pictures and romantic messages,’’ Nyongo said amid laughs.
But commenting on the issue, Kisumu County Police boss, Leonard Katana, says his team is working on the case and that the suspect could be apprehended soon.
Katana said they have contacted a team of officers Directorate of Criminal Investigations (DCI) headquarters in Nairobi who will use phone triangulation method to arrest the culprit.
The Kenyan DAILY POST