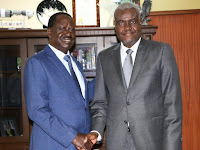 Monday October 22, 2018-A section of Jubilee Party MPs have urged National Super Alliance (NASA) leader, Raila Odinga, to quit politics since he has landed a new job with African Union.
On Saturday, Raila was appointed High Representative for Infrastructure Development in Africa.
The African Union said his appointment is part of the union’s drive to fast-track integration of the continent through infrastructure to promote economic growth and sustainable development.
However speaking at a function in Eldoret on Sunday, more than 20 MPs said that Raila should not mix his new job with domestic issues.
“We don’t want to hear politics of tibim and tialala anymore from him.”
“Let him go to his new office in South Africa and work from there,” said Kimilili MP Didmus Barasa.
Similar sentiments were echoed by Kiharu MP, Ndindi Nyoro, who urged Raila to ensure his NASA allies Kalonzo Musyoka and Musalia Mudavadi also get international jobs.
Nyoro said Raila Odinga would make a big mistake by mixing his international jobs with local politics.
The Kenyan DAILY POST