It is over for JOWIE as JENNINGS, the Recce Commando, who helped him kill MONICA KIMANI, agree to spill beans-He will rot in jail 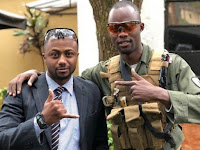 Saturday October 20, 2018-There has been a new twist in the ongoing probe into the chilling murder of Monica Kimani on the night of September 20th.

This is after it emerged that prosecutors want the third suspect in the murder of Monica Kimani, a Recce Squad officer, put under the protection unit.

Jennings Orlando Odhiambo, who was arrested in Tanzania and charged before the Kiambu Magistrate, Justus Kituku, on Friday, is said to have agreed to throw his friend, Joe ‘Jowie’ Irungu, under bus by collaborating with the detectives.

According to investigators, Jennings has crucial information about the murder of Monica and should be put under witness protection so that he not be killed before he testifies against Jowie.

The State through, the Chief Investigating Officer, Maxwell Otieno, also asked the court to detain the suspect for two weeks as they make the arrangements to put him under witness protection.

“The suspect, who indicated to the investigation team that he has crucial reports on the murder, should also be put under the protection unit investigating the case,” he said.

Jennings is said to have collaborated with Jowie in killing Monica Kimani.