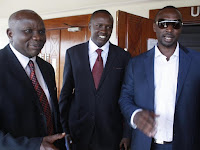 Friday October 19, 2018-Bungoma Senator, Moses Wetangula, on Thursday held a meeting with flamboyant city businessman, Bosco Gichana, who is a close ally of ODM party leader, Raila Odinga.
Gichana has been rotting in Tanzanian jail for five years after he was arrested over money laundering claims.
He was rescued by Raila Odinga who talked with Tanzanian President John Pombe Magufuli and requested for his release.
Following his release early this month, Bosco has been visiting politicians and on Thursday he visited Wetangula who is also the Ford Kenya Party leader.
A source privy to the meeting said Mr. Wetangula insisted that he's focused on running for presidency, adding that his aim is to expand Ford Kenya Party.
"He insisted that he's committed in running for presidency.”
“He asked Mr. Bosco to consider joining Ford Kenya before 2022.”
“He also dismissed claims that he has joined William Ruto's camp," said the source.
During 2007 presidential campaigns, Bosco gave Raila Odinga a brand new Hummer H2 for campaigns and from that time he is a close friend of the opposition leader.
Bosco is yet to declare his interest in any elective seat.
The Kenyan DAILY POST