Good news as MATIANGI strikes again in transport sector! This man deserves a reward as he vows to get rid of cartels, rogue matatus, gangs 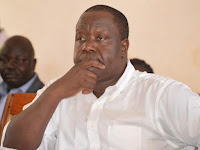 This is after he launched a serious operation to sanitize the transport sector in order to attract investors who have initially been locked out by cartels.

According to Matiangi, the sanitization operation wants to wipe away criminal gangs, rogue matatus, politicians and corrupt traffic cops.

He noted that in the next two weeks, our roads will be safer again as he would have done away with all criminal gangs, cartels, rogue police officers and rogue matatus and touts. The gangs are known to extort money from matatus and the owners.

Matiangi has promised a multi-agency team which will involve the National Intelligence Service, and whose role will be clearing the city of cartels such as Mungiki, who control the criminals, with rogue officers turning a blind eye.

Kenyans have been longing for a streamlined transport system, similar to Kenya Bus operations between 1970-80.