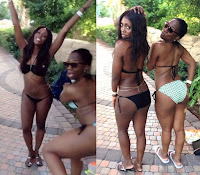 Monday, September 17, 2018 - Award winning Nigerian singer, Tiwa Savage, has taken to social media to reveal how promoters left her stranded in Nairobi after her performance during  Redsun’s ‘Baddest’ album launch at Carnivore.

The celebrated singer and Jamaican dancehall star, Demaco, were the guest acts during the highly anticipated album launch.

Taking to twitter, Tiwa claimed that promoters of the event did not meet their end of the bargain and switched off their phones after the show leaving her and her entourage stranded.

She went on to reveal how the promoters were blowing up her phone for interviews before the show.

Kenyan event organizers are notorious for acts and several foreign entertainers have been in her situation before.

Read her tweets below.