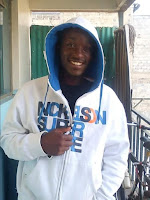 Monday, August 6, 2018- Crime in Nairobi’s Umoja Estate is on the rise with cases of people stabbed and shot dead being reported daily.

This guy has mourned his late brother who was shot dead by thugs when they hijacked an Ummoiner matatu.

He tried to resist when the thugs were robbing passengers and that’s how he met his death.