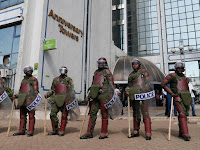 Wednesday August 8, 2018 - Amani National Congress leader, Musalia Mudavadi, has reignited the push to reconstitute the Independent Electoral and Boundaries Commission (IEBC) with others questioning the legality of the current team over lack of quorum.

Speaking during an interview, Mudavadi noted that IEBC was in shambles after conducting the shambolic 2017 General Elections.

He noted that troubles at the commission were compounded by the resignation of Dr. Roselyne Akombe, who walked out eight days to the October 26th repeat Presidential poll.

Her resignation was followed by the exit of IEBC’s Vice Chairperson, Consolata Nkatha, and Commissioners Paul Kurgat and Margaret Mwachanya in April, leaving the commission an empty shell.

Besides, Mudavadi noted that the commission is also grappling with corruption that has seen the commission’s CEO Ezra Chiloba sent on...