Real corruption thugs are at NSSF and NHIF - ATWOLI tells UHURU, KINOTI and HAJJ and asks them to move in and arrest them 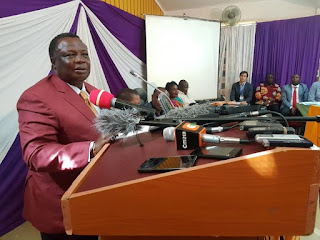 Addressing a Press Conference on Monday, Atwoli said he has evidence that massive looting is taking place at NHIF and NSSF offices.

The COTU leader said he and fellow NSSF trustee, Jackline Mugo, have on several occasions blown the whistle on looting at the two institutions but their claims have been ignored by investigative agencies.

NHIF Chief Executive Officer, Geofrey Mwangi, is said to have looted Sh 6 billion from the public funded institution and he continues to steal despite Atwoli’s warning.

Mwangi, who comes from President Uhuru Kenyatta’s stronghold of Central Kenya is said to be untouchable and has bought several plots of land in Karen worth over Sh 1 billion.

“NSSF actually transferred lots of money into some offshore account.”