RAILA throws his friend, SILAS JAKAKIMBA, under the bus as he disowns him after instigating post poll violence in Zimbabwe 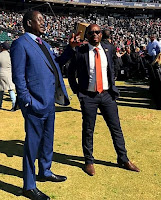 This comes even as police in Zimbabwe are seeking Jakakimba claiming that he played a pivotal role in the chaos that rocked Harare.

In a statement to newsrooms on Tuesday, ODM Executive Director, Oduor Ong’wen, denied any association with Jakakimba or the Zimbabwe violence.

He said that Jakakimba only worked for Odinga when he was Kenya’s Prime Minister and that he (Jakakimba) is currently neither an employee of the ODM party or the...