MIKE SONKO reveals that KIDERO is a murderer and he killed lawyer STEPHEN MBURU by poisoning him in a bar! 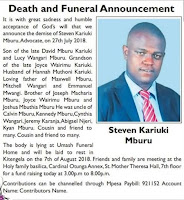 The budding lawyer was allegedly drugged while having drinks at a city joint where he slept and never woke up.

According to Sonko the lawyer was killed by Kidero and the Makongeni MCA is the one who planned the daring murder.

Sonko said Mburu’s law firm Wachira Mburu, Mwangi & co. Advocates was used to siphon money from NCC and was to deduct the 30% tax and pay to KRA but armed thugs were sent to his house and he was threatened to transfer the funds to CUPS Ltd owned by a Mr. George Wanaina Njogu (former Nairobi County Chief of Staff) & John Ngari Wanaina in full.

The Governor said the lawyer felt threatened and was forced to transfer the money to CUPS LTD who allegedly withdrew and paid the MCA in cash and deposited the balance to Kidero’s account.

He concluded by saying that the death of the lawyer will not go unpunished because there is a paper trail implicating all those who received money unscrupulously.

See the expose below

The late Steven Kariuki Mburu advocate who died under mysterious circumstances was laid to rest today at his Kitengela farm. The late Karis was a key witness in case where millions meant for Nairobi city county were misappropriated and ended up in individual accounts.

The late Kariuki Mburu of Wachira Mburu, Mwangi & co. Advocates whose law firm was used was to deduct the 30% tax and pay to KRA but armed thugs were sent to his house and was threatened to transfer the funds to the Cups ltd owned by a Mr. GOERGE WAINAINA NJOGU ( former Nairobi county chief of staff) & JOHN NGARI WAINAINA in full. Advocate Kariuki Mburu went to KRA to seek for the help of a Mr. Nico on the taxation issue.

After the threats the late lawyer Kariuki Mburu got intimidated and tranfered the funds to the CUPS LTD Jamii Bora Bank Ac. no: 1001678616001, The CUPS LTD who withdrew some money in cash and paid one of the MCa's who has been re-elected, retained his share and transferred the balance from CUPS LTD jamii bora account no.1001678616001 to
EVANS KIDERO personal account at Family Bank Ac 068000004475.

After recently realising the deal has gone sour and backfired. Some of the beneficiaries of this deal planned for the assassination of the late advocate who only days before he was supposed to record a statement on the same matter which was under investigations. The late Kariuki Mburu is suspected to have been poisoned under mysterious circumstances after having drinks at a certain joint went to a deep sleep and never woke up again.

Let me assure all the culprits involved including the so called waheshimiwa that we shall not spare you in this one. Also remember by eliminating lawyer Kariuki Mburu doesn't mean you have covered up the case No. No. No. The paper trail is there. The lawyers partners are still alive, the accountants who transferred the funds are still alive. Sonko is still alive.

Also another company owned by the same Wainaina Ngurumani ltd was paid over 210,000,000/= by Nairobi city county same Mhesh was paid in cash and the…