KIKUYUs, MERUs and EMBUs are fully behind RUTO in 2022 - RAILA is being supported by losers like KIREMI MWAIRIA!

Thursday August 16, 2018 - A decision by a section of Mt Kenya leaders to endorse National Super Alliance leader, Raila Odinga, for Presidency in 2022 has triggered fury in the mountainous region with many residents terming the leaders as election losers who have nothing to offer. 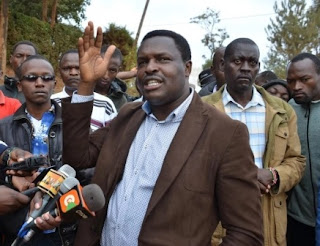 The residents led by Tharaka Nithi Governor, Muthomi Njuki, dismissed the leaders as attention seekers who have no political impact in the region.

“Their political impact on the ground is like a mosquito on the back of an elephant.”

“While those leaders have their democratic right to support whoever they want, their opinion does not even come close to what the region thinks politically.”

“Mt Kenya East is solidly behind the Deputy President in 2022,”Njuki said.

The Governor said that 2017 campaign losers could not purport to have represented the people of Ameru region in the visit to Mr Odinga on Tuesday because only elected leaders have constitutional and political rights to speak on behalf of voters.

Njuki’s statements come a day after a section of leaders from Meru met Raila Odinga at his Capitol Hill officers where they resolved to support his bid in 2022.