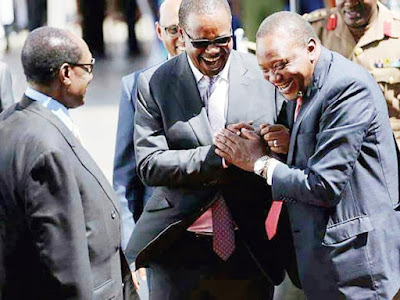 Sharing this on social media on Wednesday, Miguna said if the Government is serious in arresting corrupt people, it should start with Mama Ngina Kenyatta, Muhoho Kenyatta, Uhuru Kenyatta and his deputy, William Ruto.

He said the four are chief priests of corruption and Kidero had just joined the cabal of thieves.

“For 2 years, I have published ironclad evidence showing that @KideroEvans is one of Kenya's chief cartels, together with Muhoho Kenyatta, "Mama" Ngina Kenyatta, @WilliamsRuto, George Wainaina, Jimmy Kiamba, @UKenyatta, etc. They have looted billions of shillings of public money,” Miguna said.

Miguna also said that NASA leader, Raila Odinga, should be arrested because they were stealing together with Kidero when he was city Governor.

“As Kenyans cheer the arrest of @KideroEvans, they must be reminded of some uncomfortable truths they would rather conceal: @RailaOdinga gave @KideroEvans a direct ODM ticket for Nairobi gubernatorial seat in 2017 over other CAPABLE and ethical Kenyans. Birds of a feather,” Miguna added.