Kenyatta National Hospital on the spot again as LADY narrates how heartless doctors killed her mother, Sad and painful (VIDEO). 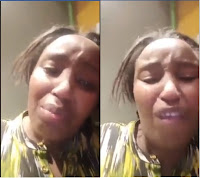 Wednesday, August 29, 2018 - Kenyatta National Hospital is on the spot again after a lady recorded a video and narrated how heartless doctors left her mother to die like a dog.

The lady rushed her mother to KNH after she was involved in an accident when she was coming from a Kesha.

Her mother was taken to KNH in critical condition and instead of the doctors attending to her, they left her to die like a dog.

The lady has video and photo evidence of the doctor’s negligence at KNH that caused the death of her mother.

When the doctors found out that the lady has evidence showing their negligence, they called police who started looking for her everywhere.

They wanted police to arrest her and delete evidence showing their negligence from her phone.

This is so disheartening.

Listen to the lady narrating how KNH doctors who have no heart left her mother to die instead of attending to her.