I am no longer married to ZAHEER JHANDA - AMBER RAY announces break up from the rich Kisii politician after using “Juju” to woo him. 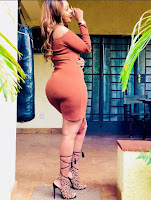 Affair between Amber Ray and Zaheer Jhanda has been widely publicized.

Sometime back, Zaheer’s first wife accused the sexy socialite of using “Juju” to snatch her husband.

Zaheer, who is a Muslim, later clarified that he had married Amber Ray to be his second wife.

Just recently, the controversial socialite splashed photos online enjoying a vacation with the rich politician and everybody thought they were the perfect match made in heaven.

But the controversial socialite now claims that she is...