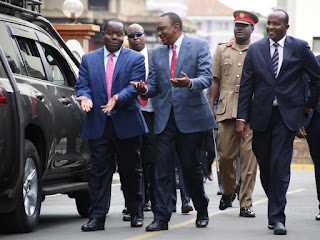 During the mass at Holy Family Basilica, Nairobi, Uhuru described Obwocha as a loyal civil servant who was dedicated and serious when serving the public.

Uhuru praised Nyamira County as the home of 'dedicated fellows' picking Interior CS Fred Matiang'i as the example in his administration.

"Nyamira is a blessed region with dedicated souls who are ready to deliver.”

“You can even see huyu mtu wa sura kali.”

“Once you trust them, you will just sit pretty and wait for something to happen,” he said as mourners burst into laughter.

"Only few cannot remember Henry Obwocha's role in revamping the economy of this nation.”

“We lost a real patriot and performer from Nyamira.”

“It is a sad moment for the entire country,” Uhuru added.

Other notable Kenyans who come from Nyamira County include Chief Justice David Maraga.