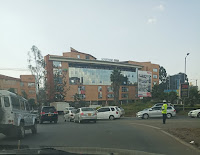 Wednesday, August 08, 2018 - The National Environment Management Authority (NEMA) has made good its threat to bring down all structures sitting on riparian land in Nairobi.

Following the demolition of Java restaurant and a petrol station in Kileleshwa, the environment authority has brought down South End Mall.

The Mall located on the junction of Lang'ata Road and Mbagathi Way and opposite T-Mall, was demolished on Wednesday morning.

This is a statement of intent from the Government as the mall is reportedly owned by former Bobasi MP, Stephen Manoti.

The construction of the mall sparked outrage due to its closeness to Mutuini-Ngong River but no action was taken then.

Other popular malls reportedly mapped for demolition for the same reasons include Ukay and Westgate both located in Westlands.

Check out photos in the next page