Tuesday, July 31, 2018 - A fourth year student at Jomo Kenyatta University of Agriculture and Technology (JKAUT) took his own life on Sunday over ‘examination stress’

The body of the 23-year old, who has been identified as Edwin Mwaizi, was discovered at his sister’s house in Clay Works, Kasarani.

A jiko and suicide note was found besides the deceased’s body.

According to the note, Mwaizi, who was a Mining Engineering student, stated that examination stress and fees was the reason for him to take his life.

The young man had been left alone at his sister’s house to prepare for the end of semester examinations.

His sister had travelled upcountry.

Speaking to the media, the sister who had to cut short her trip after the brother sent the parents a disturbing message, revealed that they had a conversation and urged him to relax and study for the exams.

“I called him back but his phone was off so I asked my neighbor and the caretaker to check on him and they said the door was locked.

“I informed my parents that I needed to travel back to Nairobi as soon as I could. 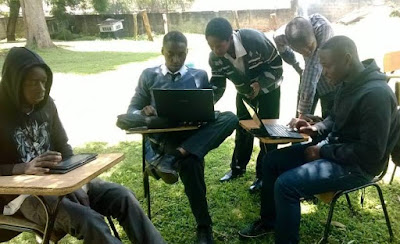 “At 11pm Edwin texted mum and told her he was worthless and when she tried calling he was not picking up but he called at 1pm telling her ‘tutaonana Mungu akipenda’ then switched off his phone.”

“When I arrived in Nairobi I found the door locked from inside. I called the caretaker and we broke in only to find him lying dead with a jiko next to him and with all windows closed. On my bed there was a note.”